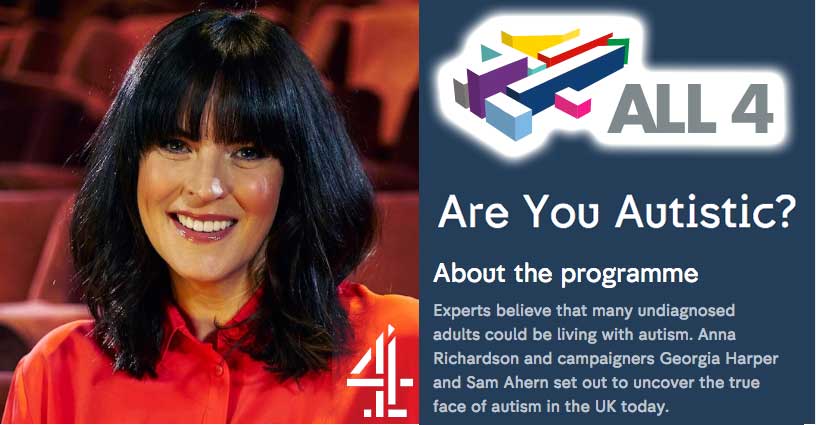 Having recently watched this programme on Channel 4, I must say I was pleasantly surprised by how refreshing its content was. Whilst it is clear there is still some way to go in terms of research and understanding of autism, it nonetheless provided some inciteful points:

1. The spectrum is not a continuum ranging from mild to severe

It was pleasing to see the programme acknowledge this, as so many people still believe ASD forms one straight continuum. This belief, itself, can potentially be harmful as it implies that if one is on the ‘milder’ side of the spectrum, that they have less difficulties to deal with. I believe this misconception has caused many people’s issues to be overlooked.

I loved how the presenters were autistic themselves. It wasn’t just any presenter stating lots of ‘facts’ about the topic; they have actually experienced the differences they are speaking about. Furthermore, the fact that they included opinions and experiences of other autistic individuals really helped to educate the viewer. They were able to convey some of the issues individuals on the spectrum face on a daily basis whilst also challenging those ‘Rain Man’ misconceptions.

3. They acknowledged a missing generation

Anna Richardson described this as ‘a scandal’ and I have to say, I fully agree. Its such as shame that so many people go through life feeling so different or having mental health issues. Yes, they will probably still feel these things but to be able to explain why they feel that way may provide some reassurance.

4. How many more females are on the spectrum?

Although it recognised that there is, without a doubt, a lost generation, it was great to see them raising the question of females on the spectrum, particularly the fact that they can present themselves differently to males with ASD. This was highlighted particularly well, in my opinion as, again, it has always seemed to be male-dominated.

5. They challenged the Rain Man myth

I absolutely loved the fact that the differences some of the autistic individuals displayed were invisible. I just feel that it is these people who are more misunderstood than those who display clear signs or ‘recognisable behaviours’. It really challenged the myth of people with ASD acting a certain way or of being able to do certain extraordinary things. The fact is, someone with autism can present just like anybody else; we absolutely need to be more aware and accepting of this. The fact that we were introduced to two individuals who have ‘fallen through the net’, demonstrates how individuals can display less obvious signs of ASD.

Anyway, these were just some of the thoughts I had whilst watching and whether correct or not, overall, I am pleased they are highlighting some of the often overlooked issues associated with autism.

There is only one week left until I break up for the Christmas holidays! I’m looking forward to having some time off work so that I can recharge, but at the same time, I’m dubious. The lack of structure and change to routine added to the social commitments can be extremely stressful, which has led me to consider what I can do to make the Christmas period as stressless as possible (as much for others as myself).

These are the main issues that I have thought about that I know affect me personally during Christmas. Considering some of these strategies before-hand should, hopefully, make some aspects of Christmas slightly easier so that it can be enjoyed by me and the people I am spending it with too!

Mind the Flap
Some Girl with a Braid

Autistic, creatively writing, and loving it

life through one female Asperger's lens

The David and Christina Show
The Autism Teacher

A daily selection of the best content published on WordPress, collected for you by humans who love to read.

The Art and Craft of Blogging

The latest news on WordPress.com and the WordPress community.